skip to main | skip to sidebar
Once upon a time, this was my blog for Ward Activity Ideas. Since then, I have served in YW, and Mid-singles. Currently, I am leading the Primary Children's singing time. Thus, I have expanded this site to include anything LDS activity related.

This was an activity that was in the very early stages of planning when I got released. (Sorry it has taken me over 6 months to post!) While I do not have all of the details I will post what I do know as it was a huge success.

First of all, I will tell you that my Ward had done "Christmas in Bethlehem" about 5 years ago (Before I was called) and it was far too unorganized and far too much work. The feedback wasn't necessarily positive after that, so when I suggested it as a possibility to my committee, you can imagine the looks I received. If you have never heard of the concept of Christmas in Bethlehem, you may want to first read about it {{HERE}}.

I promised my committee that we would not be too elaborate and that keeping it simple would help to make it a success. They all agreed, especially because our budget was small.

Budget: (I am not sure what their budget was as I was release nearly 11 months earlier.)

Flyer: We pretty much used the same verbiage as was found at the link above. Invitations were rolled up into scrolls and tied with small twine.

Set-Up: The Relief Society Activity Committee helped the Ward Activity Chairperson in getting all of the assignments made. Starting the 1st Sunday in November, the sign-up sheets were circulated through. Unlike many wards, we did not ask classes or quorums to run a booth. (The downfall of the prior attempt 5 years earlier.) We wanted families to be able to enjoy the evening together and didn't want unattended children running all over the place. There were sign-up sheets asking families to run a booth (I think we had about 8-9 booth). We had sign-up sheets for those who could donate canopies for booths. And there were sign-up sheets to ask people to bring the following food items: Breads/rolls. Cookies. Cheese Cubes. Black Olives. Cut-Up fruit.

Special Instructions: As each family arrived, they were asked to sign the Census. (Husbands of the Activity Committee were dressed like roman soldiers.) The soldiers gave each member a small bag containing coins. (12 pennies per bag. This was enough to get their food and then a few more items.) We were then all guided to the chapel. There we sang a Christmas Carol and the activity chairperson explained how the marketplace worked. The overflow area was set up with a little pathway (cardboard "walls" and battery operated candles in paper sacks) leading to the gym. They gave about 30 minutes for people to "shop" and eat before they were invited to be seated and watch the reenactment of the nativity.

We have a lady in our ward who has all of the props and costumes for the nativity. She created these years ago for her children and extended family. Every other year we ask her to run that part of our Christmas program. She loves it. She gets all of the actors organized and rehearses with them. There are places in the nativity program for the rest of us to sing a verse of a Carol. We love it too, as it takes added pressure from the committee!

Turn-Out: We had several people attend (I counted close to 100) and everyone had a wonderful time. I think the pictures tell the best story, so without further adieu... 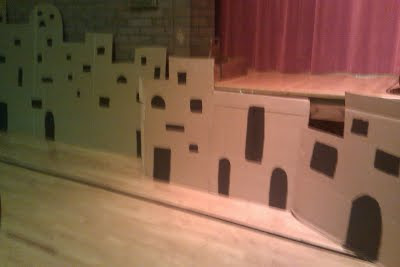 The committee basically flattened a ton of cardboard boxes and using really fat black permanent markers turned them into "buildings". They were cut, shaped and then taped together and set along the outskirts of the room. 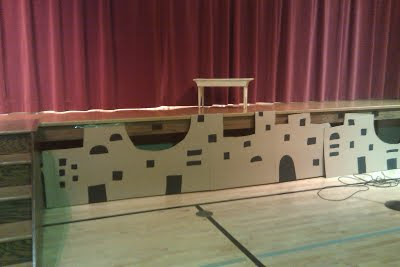 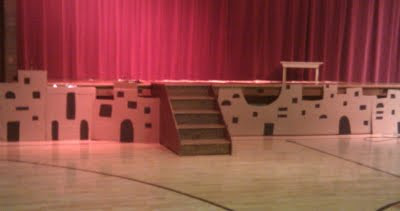 Here is the Water "Well". The Base is actually a plastic tub (Sitting on a step to make it taller), filled with ice and then water bottles, then covered with thick brown paper and the rim is a spray painted pool noodle. The wooden frame helped to keep everything in place and was cute. 1 Bench was brought from home, while the other three were confiscated from the Primary, YW, & Relief Society rooms. 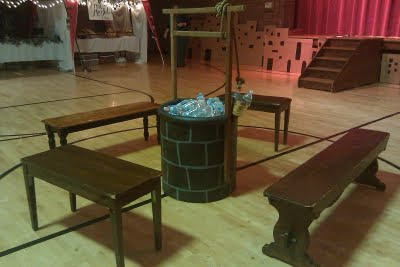 Booths were created out of modern-day canopies. Sheets were hung in between to create "walls". The insides were lined with Christmas White Lights and other things such as baskets. Poster boards were used for the sign shops. 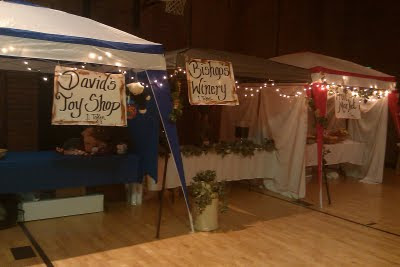 At David's Toy Shop we were "selling" little dreidels. The Committee purchased these online in bulk. There were other toys and trinkets that were in the activity closet from activities past, so we thought it would be a good idea to "sell" those too. 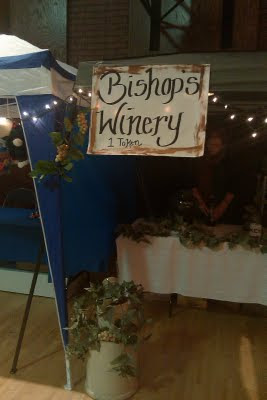 The Bishop's winery had sparkling Grape Juice. (Grape Juice & 7-Up in punch bowls) 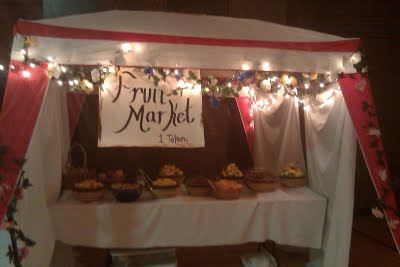 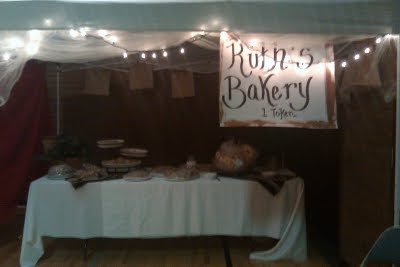 Ruth's Bakery contained rolls & honey along with several types of cookies and bars brought by the members (via the sign-up sheets). 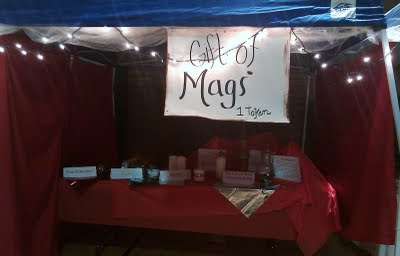 The Gift of the Magi was selling Gold (chocolate gold coin), Frankincense, and Myrrh. I don't remember was the Frankincense was, but 1 token got you all 3 and the Myrrh meant you got to use some of the lotion. 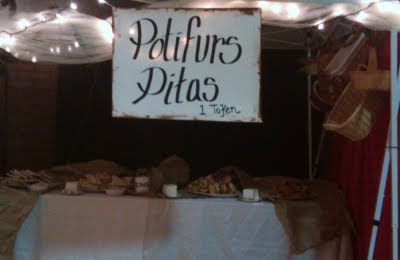 Potiphar's Pita hut "sold" pita wedges and toppings such as Hummus, Cream Cheese and Honey. The Activity Committee supplied the food items for this hut. 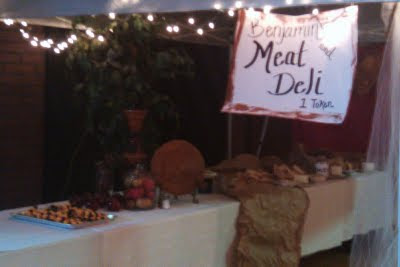 Benjamin's Meat & Deli was offering grilled chicken strips (provided by the committee) and "Deli Kabobs" of cheese cubes and black olives (provided by members via the sign-up sheet). 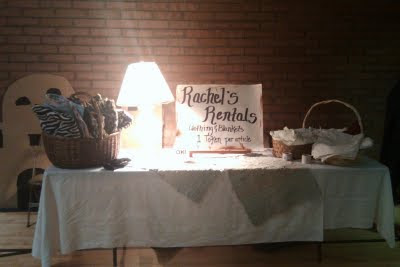 Rachel's Rentals contained a basket full of blankets for those who did not bring one to sit on. 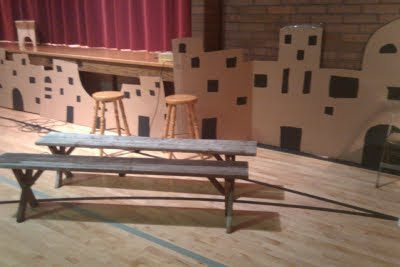 One of the members brought these benches from home. The "actors" for the Nativity program sat here until it was their turn to go on stage. 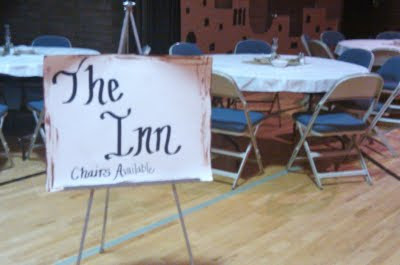 The back corner of the gym was set up with tables. It was announced ahead of time that these were for the elderly or for those who could not sit of the floor. 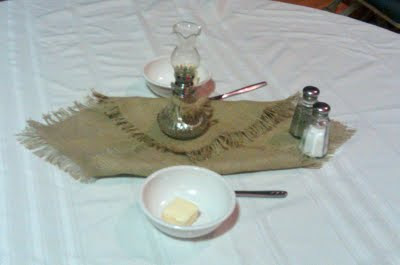 The tables were decorated with simple burlap cloths and mini lanterns. 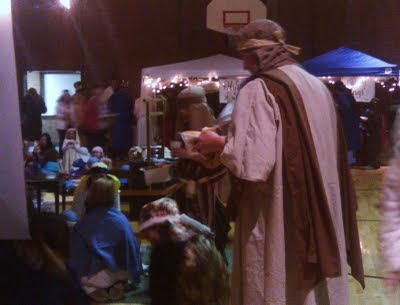 This was taken after it the marketplace opened for business. 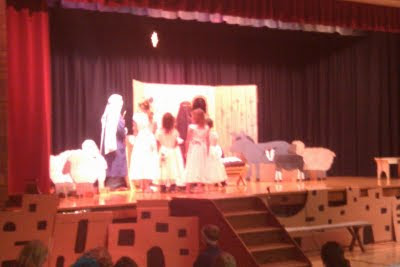 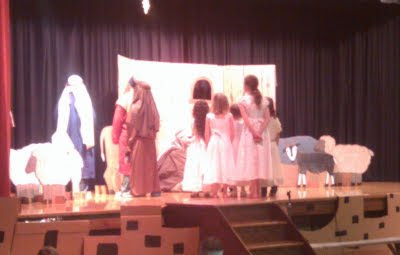 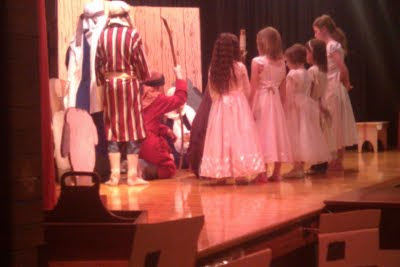 The lady who organizes this for us uses all Primary Children and no adults for this. When most of the kids are playing a part, it's easier to keep them from running around. :) 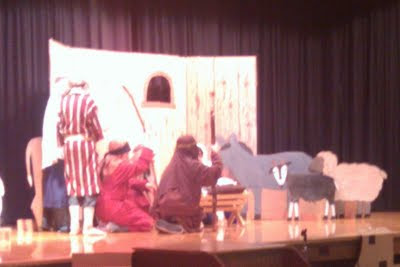 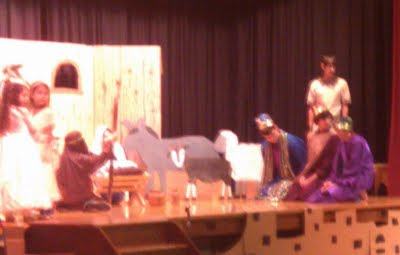 That is a brief overview from our night in Bethlehem. I hope it inspires something for you! Good Luck!
Posted by EmmaP at 3:21 PM

1)Always attend Ward Correlation/Ward Counsel so that you can get the support of the entire Bishopric as well as all of the auxilliaries.

2) If you have a committee, USE them. Nothing is worse than feeling like you're unappreciated. Delegating can be hard; trust me, I've learned the hard way. ASK your committee members how much they would like to be involved. Some would like to oversee an activity on their own. Others like to plan and prepare the food, some enjoy the decorating while yet others simply want to show up and set up. Find out their strengths and utilize them.

3) Advertise! Advertise! Advertise! I can't say enough about advertisement. Something I learned from a previous chairperson was to have a YEARLY refrigerator calendar. This is a half-sheet that outlines the dates of the activities, whether it is for the entire family or just adults, and the name of the activity. I place a magnet on the back, and each family receives one in the beginning of the year. The members love it, as they can see it all year long, and they have often made comments such as, "I can't wait until ______". It builds anticipation and gets them excited. Of course, make sure the activity shows up in any ward calendar or bulletin as well, and have the Bishopric announce it when possible. I personally don't do posters, because I haven't needed to. But I know other wards that do. I have a half-sheet flyer that gets copied onto the back of the program and is on EVERY week until the event, and then the next flyer goes on.

4) Ask for a Commitment! Anyone who has ever served a mission for the church, or even worked in sales knows the importance of asking for a commitment. The simplest way to do this is to circulate sign-up sheets ahead of time. I have found that if I pass around a sign-up sheet, "just to get a head-count", I get a better turn-out than when I do not. And it doesn't even matter what type of activity it is, or whether or not there is food to prepare. When someone "signs up" to attend an event, in their mind, they have made a commitment to be there; the decision is done. When they are not asked to make a commitment, I find they usually won't.

5) Keep them in Mind! Make sure to consider the needs/wants of the ward when planning your activity. If your ward is mostly elderly couples perhaps a night of Sock Hockey would not be enjoyable. If you want to have an adult dinner and there are a number of couples with small children, then provide a nursery.

6) Be Consistent When you say you're going to have an activity, do not cancel unless extreme circumstances require it, as you will NEVER be able to get a hold of EVERYONE, and there is always the few that may show up. Once you decide with your bishop how often you will have your activities, BE CONSISTENT. I have had activities planned, and then something else will get planned after the fact, like a town carnival. I figure, even if only 10 people come, we will have fun with those 10 people. It is more important to be consistent.

7) Be Flexible & Have Fun! Don't sweat the small stuff. Learn to improvise. Even though this calling will seem exhausting on numerous occassions, don't add to it by letting things get to you. Remember, that if anyone has come and enjoyed it, it was a success. 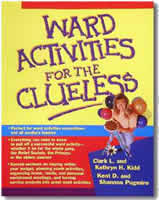 Ward Activities for the Clueless